From the Danube river to the Little Carpathian Mountains

Bratislava is excellent for cycling. The capital of Slovakia has an interesting location on the banks of the Danube and at the foot of the Little Carpathians. In the vicinity of Bratislava you will find tens of kilometers of cycle paths suitable both for road and mountain bikes. What are the best bike trips? As an avid cyclist wading through the city streets and bike paths in the area, I recommend these. 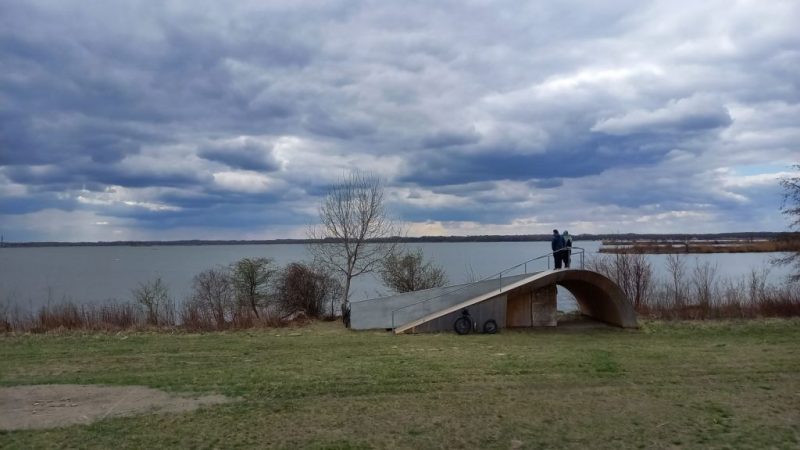 Along the Danube river in Bratislava there is a great cycle path with quality asphalt and many buffets. From the center of Bratislava to the so-called “Petržalka dike” on the right bank of the Danube via any of Bratislava’s bridges – Lafranconi Bridge, SNP Bridge, Old Bridge, Apollo Bridge, or Port Bridge. The cycle path bypasses Petržalka from the east side. On your right, you can sense socialist blocks of flats through the treetops, on your left you can see meadows, lowland forests and beaches of the Danube. Let yourself be lured by one of the paths to the preserved floodplain forests, to the dead river arms and houseboats. Behind a pair of large buffets, turn left. You cycle directly along the Danube through the preserved floodplain forests. Once again, you will connect to the dike, which after a few kilometers will lead you to the path above the hydroelectric power plant with nice views of the giant Hrušov Reservoir. Behind the water sports complex you are already coming to the Danubiana Gallery of Modern Art. The elegant ship-shaped building stands on an artificial peninsula, washed by the waters of the Danube.

Back to Bratislava, take the quality asphalt road next to the dam. If you like the natural surface, go through Čunovo to the pristine Čunovo lakes and then along the forest path to the park in Rusovce. Lake Rusovce nearby is also a nice place to swim. Behind it, you will connect back to the Petržalka dike. Another alternative for returning to Bratislava from the Danubiana Gallery is to take a raft to the other bank to Hamuliakovo and return to the city centre along the beautiful asphalt cycle path of a dike on the left bank of the Danube. If a one-way trip is enough for you, take a city bus no. 90 from Danubiana gallery to Bratislava city centre, off-peak it should take you also with a bicycle.

Map of the bike path along the Danube river to the Danubiana Modern Art Gallery. 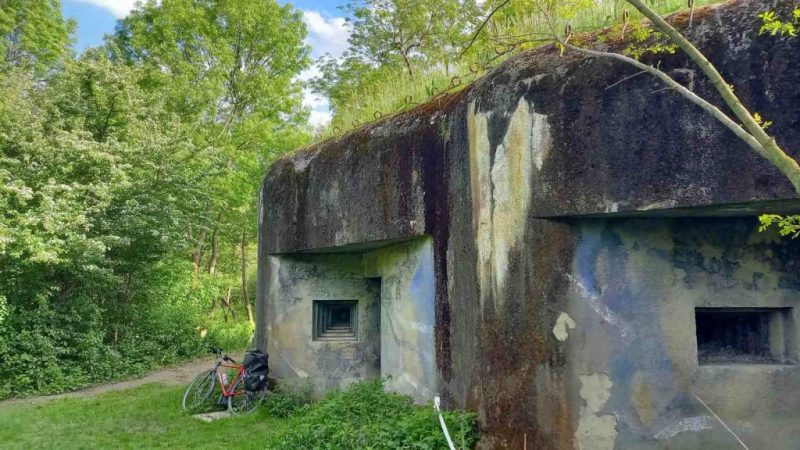 2. Cycle trip along the Bratislava Iron Curtain to the military bunkers

Bratislava has a unique location on the border with two countries, Austria and Hungary. Until the beginning of the 20th century, „Pressburg“ was more German and Hungarian than Slovak. Turbulent geopolitics after the First and Second World Wars caused Bratislava to be surrounded by a system of military fortifications of concrete bunkers in the 1930s and, after the onset of communism in 1948, surrounded by barbed wire of the Iron Curtain. Massive concrete bunkers stand to a large extent to this day, barbed wire is a thing of the past, except for a small sample.

Take an interesting cycling trip through the history of the 20th century along the border with Austria along an asphalt cycle path and visit some of the bunkers built before the Second World War by the Czechoslovak army. From the left bank of the Danube, cross any of the Bratislava bridges to the south side of the city. From the dike, turn right under the Lafranconi Bridge to the asphalt cycle path, a path originally used by border guards to protect the borders of socialist Czechoslovakia from the perversions of the imperialist West. Make a stop at pristine beaches of the Pečnianska Riviera on the banks of the Danube on your right. The first BS-1 concrete bunker indicates that you are approaching the border. After a two-kilometer drive through a wild floodplain forest, you come to a demonstration of barbed wire from the time of the Iron Curtain. Behind it, turn left and follow an unpaved path to the Petržalka Fortifications Museum (mpo.sk). In addition to the renovated BS-4 bunker, where on Saturday from April to October you will have a chance to look inside, there are also examples of anti-tank barriers, trenches and other authentically prepared examples from the time of wars and totalitarianism.

A short distance behind the bunker you arrive to the border crossing Petržalka – Berg. Behind it, the cycle path winds directly along the border line through the fields. Another military museum in bunker BS-8 (bunker.bs8.sk) can be found after a few kilometres on the left. There is also an impressive military cemetery from the First World War with hundreds of white crosses, an anti-tank trench and a demonstration of military cover. Back to the centre, cycle along the cycle path on Kopčianska Street, through the “Petržalská Promenade” and next to the Incheba Exhibition Centre to the SNP Bridge.

Map of the bike trip along the Iron Curtain to the military bunkers. 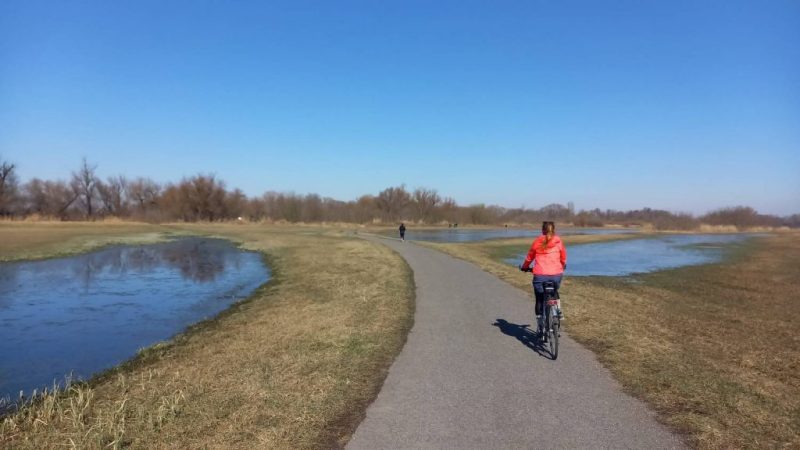 3. Devín Castle and along the Morava River by bike

Devín Castle proudly standing on a rock above the confluence of the Danube and Morava rivers is one of the most beautiful places in Bratislava. From the centre of Bratislava you can get here by bike on the asphalt road in traffic with bike pictograms, but behind Devín you can find tens of kilometres of beautiful asphalt bike paths along the Morava River as far as to the border with the Czech Republic.

The cycle route behind Devín follows the river on the left and the Devínska Kobyla massif on the right. The western slopes of the highest hill in Bratislava are unique for their arid flora. The massive “Waitov lom” quarry has witnessed sandstone mining in the past. After the views of the river, make a turn uphill to the sandstone rock Sandberg, a site of prehistoric fossils. On the outskirts of Devínska Nová Ves by the cycle route, you will find the “Cyklomost Slobody” bridge across the river to Austria with monuments to the victims of the Iron Curtain, as well as a military bunker underneath. Other bunkers line the cycling route to the north through the floodplain meadows of the Morava River. After a few kilometres you come to the historic arched Marchegg viaduct from the 19th century.

For refreshments, go to the parallel asphalt with easy traffic to the “Buffet at an old bicycle” pub in the locality of Devínske Jazero. From here, return on the same route, or take a train to the centre of Bratislava. If you feel like, continue on the Iron Curtain cycle path to the north towards Vysoká pri Morave, Záhorská Ves. A nice cycling route from Devín Jazero also leads to Stupava, from where you can get through Borinka to the cycling routes in the forests of the Little Carpathians.

Map of the bike trip to the Devín Castle and along the Morava river. 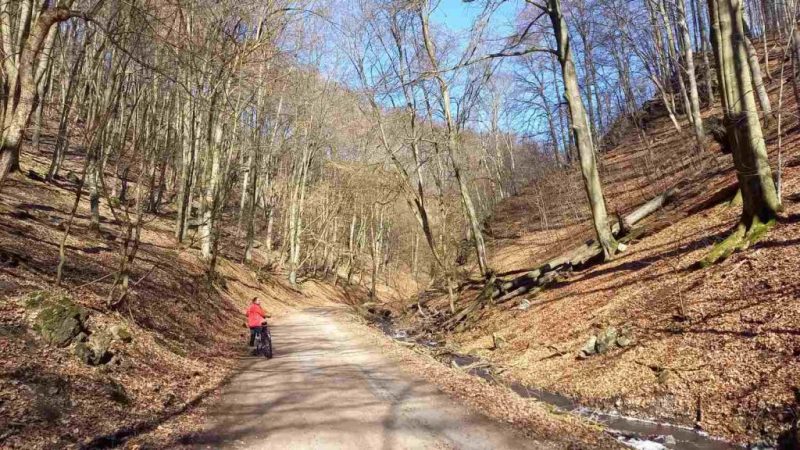 4. By bike to the Little Carpathians

If you are a fan of mountain biking, head to the forests of the Little Carpathians. Here you will find tens of kilometres of bike paths on asphalt and unpaved roads. The gateway to the kingdom of the forest is the Železná studienka recreational site northwest of Bratislava city centre. You can get here by bike in less than half an hour along the waterfront and then through “Mlynská dolina” valley, or along the “Hlboká cesta” street uphill. Another popular entry point is Kamzík, but getting here means to cycle up a rather steep hill.

The best cycle route on a paved surface for road or trekking bikes leads from Železná Studienka through along Vydrica valley to the north along ponds, former mills, abandoned quarries, meadows and beautiful natural nooks. Behind the U Slivu crossroad, you can take the asphalt road to Pekná cesta, or continue to the left with steeper ascents towards Červený kríž (Red Cross) and the Biely kríž (White Cross) mountain hut. From these places asphalts lead to Rača. Behind Biely kríž, the asphalt soon splits. You can get to the left in the direction of Borinka and Stupava, or Lozorno. Or you can turn right for downhill on good quality asphalt to Svätý Jur, from where there are traffic-free asphalt bike paths towards Rača, Vajnory and Vrakuňa.

Map of the bike trip into the Little Carpathian Mountains. 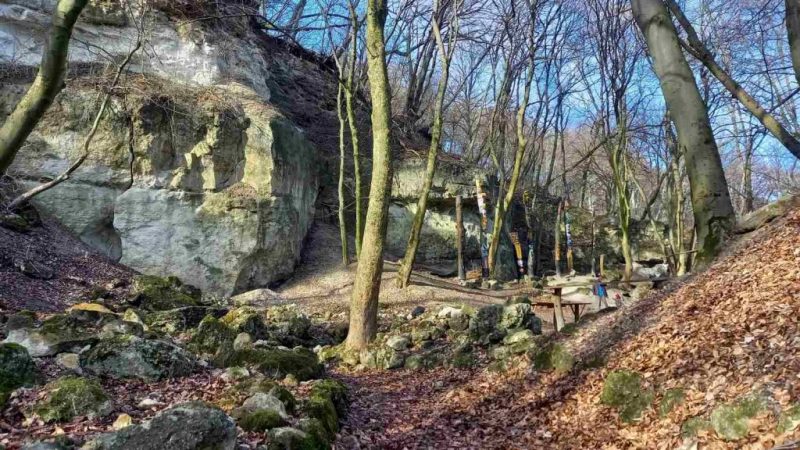 The highest peak of Bratislava can be reached by bike on the asphalt road. And there is a wonderful view from it. Devínska Kobyla (514 m above sea level) is a large wooded hill and hides several nice bike paths. The best place to start your cycling adventure is the final stop for buses 32 and 33 at the Dlhé diely housing estate neighbourhood in Karlova Ves district. If you need to get here from the centre of Bratislava by bike, cycle along the Danube around the River Park, over Karloveské rameno and a steep climb from Devínská cesta through the housing estate area.

Above Karlova Ves you cycle along a nice forest path with moderate elevations to Dúbravská hlavica. From here, the asphalt road will take you to the top of Devínská Kobyla. If you prefer a natural surface, take the forest path to the left of the asphalt road. Behind the concrete wall and the non-existent gate, you enter the area of ​​an abandoned missile base from the Cold War. Massive concrete hangars, bunkers, barracks and other military facilities are a silent witness to the efforts of the Czechoslovak People’s Army to defend the socialist city of Bratislava from the enemy from the West. On the top of Devínska Kobyla, enjoy the perfect view from the unique lookout tower of Bratislava, the Little Carpathians, the Danube and Moravia rivers and Austria.

After leaving the area through the same exit, turn left and descend through the preserved beech forest. You can continue to Devínská Nová Ves, Devín, or bypass the massif from the west back to Dúbravská hlavica. From here, the asphalt road will take you to Dúbravka, or the same forest road to Karlova Ves.

Map of the bike adventure around the Devínska Kobyla.

Bike Journey from Slovakia to Portugal